By eBizRadioOctober 25, 2017No Comments5 Mins Read

Leonida Mutuku is just 28, but is already becoming recognised as one of the pioneers of digital technology in Africa.

This is all the more startling in that she has ventured into an area in which technology and innovation has been the preserve of large conglomerates and multinationals.

She runs a small company in Nairobi called Intelipro, which she describes as “a boutique data-science consultancy”. Her profile describes her as “a technology researcher, data scientist, entrepreneur, investor and futurist”.

It all sounds visionary and idealistic, but the combination is making a real-world impact on a massive scale. More than 25 000 small-scale farmers are using a platform she created to help plan, finance and sell their crops. The only tool they need to make the connection is their mobile phones.

In just two years, Mutuku has made waves that are being felt internationally. She was invited by cloud computing giants VMware to share the keynote stage at its recent VMworld conference in Barcelona. The focus of the event is on the future of cloud computing and data centres. Intellipro uses elements of the VMware cloud platform, and was highlighted as a case study in how small businesses in emerging market can make a massive impact.

How did she come so far in such a short time? The superficial answer is that cloud computing makes it possible to scale up a small business to a massive level, in a short time, with limited resources. But beneath that technical layer lurks a story that is almost an archetype of entrepreneurialism in Africa. 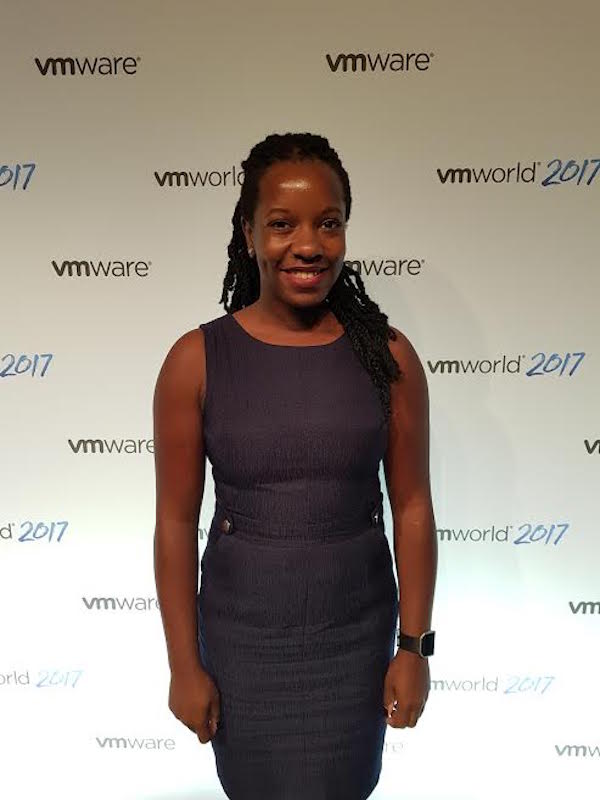 Mutuku studied actuarial science at the University of Nairobi, but realised she wanted to do more than crunch numbers: she wanted to make a difference. She enrolled for a Masters of Business Analytics and Big Data at a business school in Madrid, which allowed her to attend classes every six months while she built her business.

Armed with this formidable set of qualifications, she “slowly transitioned into programming”, and began working with the legendary Nairobi technology incubator, the iHub.

“I was interested in how to use computers to analyse data, and that veered into the big data space. I was working with the  iHub, supporting a data science lab, and grew it to $250 000 revenue in one year. I was interested in applying data science in industry, as very few businesses in Africa use data to drive decision. That was the motivation to start Intellipro, to help small and medium enterprises (SMEs) to use data to drive customer demand.”

Intellipro developed automated risk models, using a form of artificial intelligence (AI) to help financial institutions provide credit and micro-financing to SMEs. But it was when she began applying her data science to agriculture that the penny truly dropped regarding the power of big data, the cloud and AI in financing farmers.

“We rolled out this mobile-based platform called eGranary, using USSD short codes. One can access the application from any phone by dialing *492#. When farmers register on it, we verify their identity through their mobile number. They are then able to log the size of the farm, production data, how many cages of seed, how much fertiliser, how much they have paid workers, and so on. It’s like a diary for the production process.

“At harvesting time, they log how much they harvested. We include data from the East African Farmers Federation, which represents 20-million farmers, to predict their productivity, based on similar farmers’ productivity. We can then see how much to give them in terms of credit for seed or fertiliser.

“In some cases, we don’t give them the cash, but pay a distributor. So they apply for a loan, also through the platform and, if approved, they go to the distributor and collect their seeds and fertiliser.”

Intellipro is currently working with soy, bean and maize farmers, but the platform is more broadly applicable. Its magic comes in its power of prediction, and the benefits that can bring to farmers.

“When they are planning to harvest, and we have the data , we can give them a portion of the payment upfront, even before the offtaker – the broker who buys a portion of future production – takes it.”

This is only the beginning of Mutuku’s plans for farmers.

“Our current product is supporting them in terms of financial services and getting credit, but where it’s going is to help make better predictions from productivity data they are logging. Right now the individual farmer doesn’t get predictive analytics, so the next step is, how do we give back intelligence based on what they have logged with us?”

This idea is that the platform will automatically send out alerts, based on what the farmer is tracking, with reminders to apply fertiliser. It will even, based on productivity data coming in from other farmers, advise them to try a new or different brand of fertiliser.

The platform is one year old, it has 25 000 farmers using it, and applicants have received $150 000 in credit over two cycles of six months each.

Mutuku points out that, ironically, she is no agriculture expert.

“Ultimately, our expertise is in the credit and risk profiling, in analytics, not so much directly in agriculture. But this is close to our hearts because of the impact it has, and because we are investing in the lending future.  We’re currently in Kenya, Uganada, Tanzania, Rwanda through the EAFF, but there are so many people who could benefit across Africa.

“Our next step? To see how soon we can penetrate South Africa.”

How did eGranary get so big so fast? See: The cloudy secret to scaling up