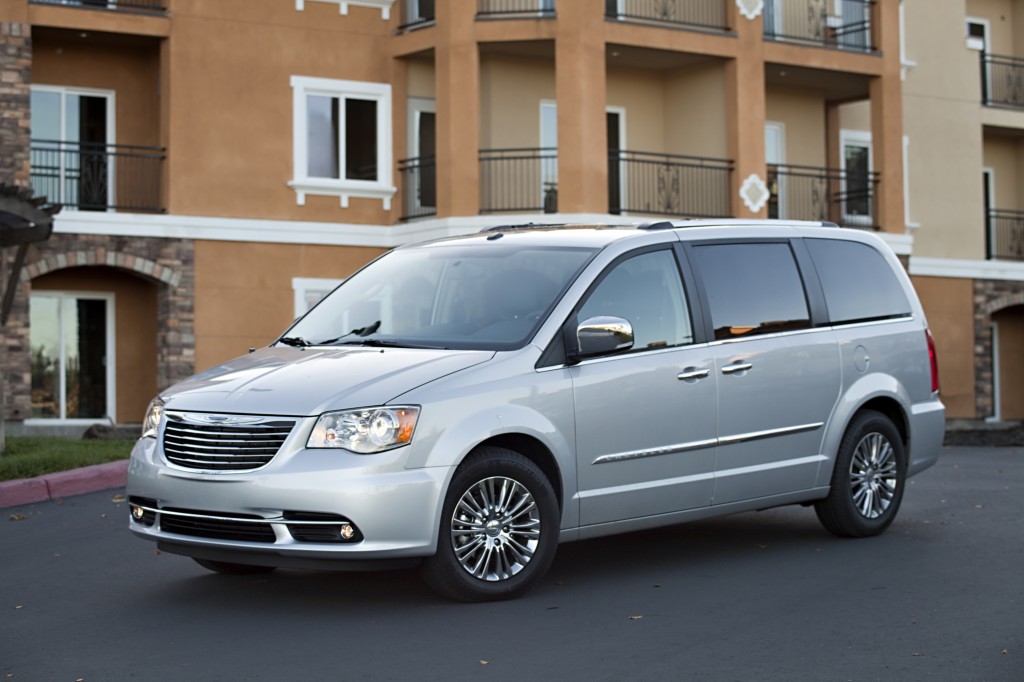 Chrysler’s Grand Voyager is so versatile that even the president, his wives, and kids would approve of it…

Chrysler’s certainly stepped up their game in recent years. They’ve given us performance models such as the 300C SRT8 and a host of other model in their Jeep line-up as well. But the practical Chrysler Grand Voyager – even with its host of features and electrically operated doors – still lags behind European alternatives such as the Volkswagen Caravelle.

It’s a capable long distance cruiser, and the diesel engine is surprisingly efficient when compared to the likes of the Hyundai H9. Added to this is the superbly practical seating arrangement and colossal load area that makes the otherwise underwhelming Chrysler an incredibly practical family car.

If you like a car that looks like a van, then the Chrysler Grand Voyager should be top of your list. It has a typical, boxy, American design, making it an imposing thing to look at. The front-end is characteristically Chrysler, with flashes of chrome everywhere. Inside, the cabin has plenty of storage compartments, but some of the plastics still feel cheap and the design is dull.

However, the Grand Voyager redeems itself as a long-distance cruiser. Highway refinement is great, and the 2.8L turbo diesel engine means performance isn’t blunted when hauling a load. However, take the Chrysler to something a little twistier and the Grand Voyager’s bulk becomes all too apparent. Stacked against a Volkswagen Caravelle, the big Chrysler tends to roll in the corners and doesn’t come close in terms of driving dynamics.

Chrysler has a reliability record and doesn’t appear to have any issues with parts. Usability is the Chrysler Grand Voyager’s trump card. The “Stow ‘n Go” seating arrangement impresses, with all rear seats folding simply and quickly into the floor – revealing a gigantic boot space.

Compare this to the Volkswagen Caravelle, and the German equivalent falls short when compared to the colossal Chrysler. The second row of seats rotates through 180 degrees, which gives a usable office space – making this the MPV of choice for chauffeurs.

We even piled used the Grand Voyager for my home move – which resulted in use squeezing in a couches, tables and chairs and other goodies that wouldn’t necessary fit into an SUV or onto a bakkie.

However, the Grand Voyager is at an automatic disadvantage alongside German rivals due to its sheer bulk. The Chrysler is heavier than the Caravelle, and economy suffers as a result. Managing just 12.5-litres on the combined cycle, the VW is capable of under 10-litres per 100km. But it’s surprisingly easy to drive and it has a brilliant turning circle despite its size. The rear camera is also handy when reversing in tight spaces.

Interestingly, you might find it difficult to spot on the open road, but there are a number of them on our roads. It generally finds favour at hotels and shuttle services, and the odd family with three or more kids. The Grand Voyager has tough competition up again the Mercedes-Benz Vito, Volkswagen Caravelle and Korean models such as the Hyundai H9. But it shouldn’t be ruled out a worthy alternative to mainstream German rivalling models.

In the eyes of the jury, PFK’s Autowatch Alcolock 740 WAB breathalyser immobiliser was perceived to represent a significant step forward in the fight against drunk driving. The device, which is manufactured locally by the Durban-based company, is a refinement of an earlier breathalyser immobiliser, the 720 TAB which, in 2009, was awarded a silver certificate in the competition.

The forerunner is exported to five countries and has helped to establish internationally the company’s Autowatch Alcolock brand. The new product – which will be introduced to the market from this month – differs from the original in that it is no longer a tethered unit but instead, wirelessly operated. It is also smaller, lighter and faster, with many new features.

Essentially, though, its aim remains similar – to prevent drivers who are over a stipulated alcohol limit from starting their vehicles and to deliver that data to a transport operator or owner.

Tested for production over a period of 18 months and found to be accurate and secure, complying with international standards, the 740 WAB was described by jury members as a world leader: innovative, accurate, reliable and user-friendly.

The Autowatch Alcolock system has been widely used in public transport systems in Europe. It is relatively inexpensive to fit to a vehicle and can be beneficial to most fleet owners and private vehicle owners as well.

eBizRadio is a live multi- platformed social media service providing an online forum to the business community for holding conversations on the key issues related to specific businesses as well as availing a space for cross-business collaboration in response to key issues affecting the world of business. The place to go if you want to know about business and lifestyle
Post Views: 782
Don't be shellfish...

END_OF_DOCUMENT_TOKEN_TO_BE_REPLACED

To ban or not to ban alcohol advertising? | hosted by Tony Koenderman & Craig Page-Lee | #TsAndCsApply

Are you looking after your assets? | BizEntrepreneur | Darlene Menzies