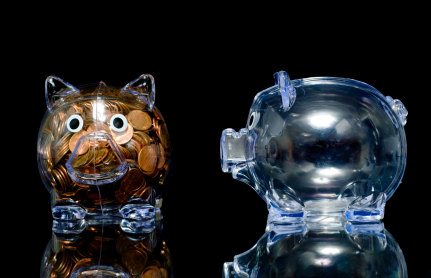 Wage Gap
Although there have been a number of different methodologies used in order to calculate a “Wage Gap”, the methodology used by the United States Securities Exchange Commission is calculated as:

This calculation provides the user with the ratio of how many times higher the CEO’s pay (chosen element of pay) is than the median worker’s pay. The benefit of using this methodology is that it is simple to compute and easily understood. There are weaknesses in the Wage Gap methodology which include:
By simply halving the CEO’s pay, the ratio will halve even if there has been no gain to the worker’s welfare.
The grade of the “median employee” is unknown and therefore an organisation with a high number of lower level employees is more likely to have a higher wage gap.
Limitations in the methodology are not exclusive to the Wage Gap. There are a number of measures of income inequality which can be calculated, all with their own benefits and limitations.
10 -10 Ratio
The 10-10 Ratio is often used as a crude measure of inequality within macroeconomics when all the data needed in order to calculate a Gini Coefficient is not available. It is similar to the Wage Gap in that it measures the ratio of the highest paid employees to the lowest paid employees. It is calculated as

This methodology is more inclusive than the Wage Gap as a number of employees rather than a single employee is used as the numerator.

The benefits of this methodology are:
It is easy to calculate
It is more inclusive than the standard Wage Gap in terms of how the numerator is calculated
The disadvantages are:
It does not provide information regarding the other 80% of the sample
The 10-10 ratio is therefore best used in conjunction with a Wage Gap analysis as it will alert the user to structural issues within the data if they return significantly different results.

Gini Coefficient
This measure is traditionally used in macroeconomics and measures the inequality within a distribution (in this case income). The full methodology of how it is calculated is rather mathematically sophisticated and falls outside of the requirements of this analysis. In layman’s terms it measures the area between the “Line of Equality” (when everyone earns exactly the same) and the Lorenz Curve which is the cumulative distribution of all incomes in the sample, ranked from lowest to highest. The greater the distance (area) between the Line of Equality and the Lorenz Curve, the more unequal the income distribution is.

Figure 1: Graphical Example of a the Gini Coefficient Calculation 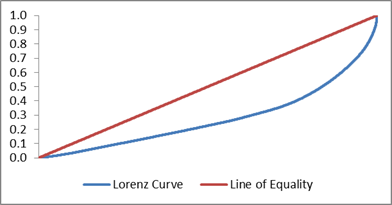 The benefits of this methodology are:
• It makes use of the entire population of the sample rather than only a subsection and therefore provides a more inclusive picture of income inequality.
The weaknesses associated with this methodology are:
• A small sample may result in biased results.
• It can be computationally difficult to calculate.
• It does not provide a measure of inequality within sub-sections of the population

The disadvantages to this methodology:
• A large enough sample within each sub-sample is required in order to be able make comparisons between sub-samples and draw significant inference from the analysis.
• If the distribution of the data is far from a normal distribution, it can produce biased results as the standard deviation may be excessively high due to outliers in the data set.