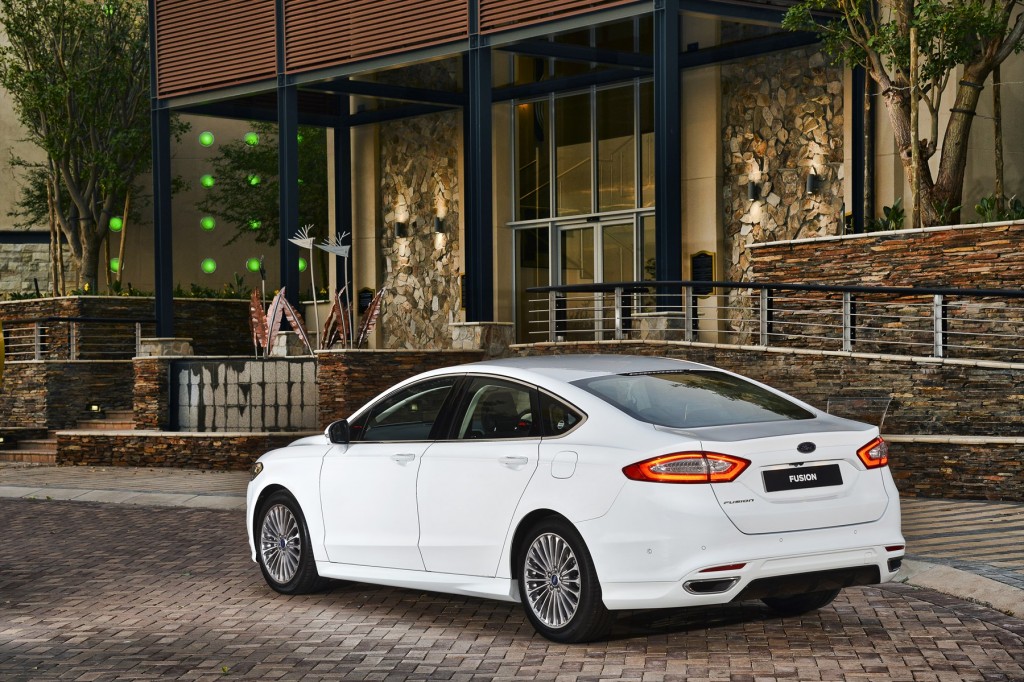 Although I’m tempted to use the term “fiercely contested” when referring to the sedan segment Ford has recently re-entered with its new Fusion, I just can’t do it. The truth is, it’s not at all.

The ubiquitous German trio, which inevitably pops up in any mid-size sedan review, still has a choke hold on this end of the South African market; and even if a new entry comes in with good looks, more space and lots of gizmos for less money, it’s quickly disregarded by the status-obsessed public as a true 3 Series, C-Class or A4 rival. Just ask Honda, VW, Lexus and Infiniti.

Instead I’ll call the Fusion an alternative option to the fiercely contested premium sedan segment. In top-of-the-line 2.0TDCi Titanium trim, as on test here, Ford’s new flagship is indeed a feature-rich and competent package, which on paper can hold its own against the Teutonic trio and then some. 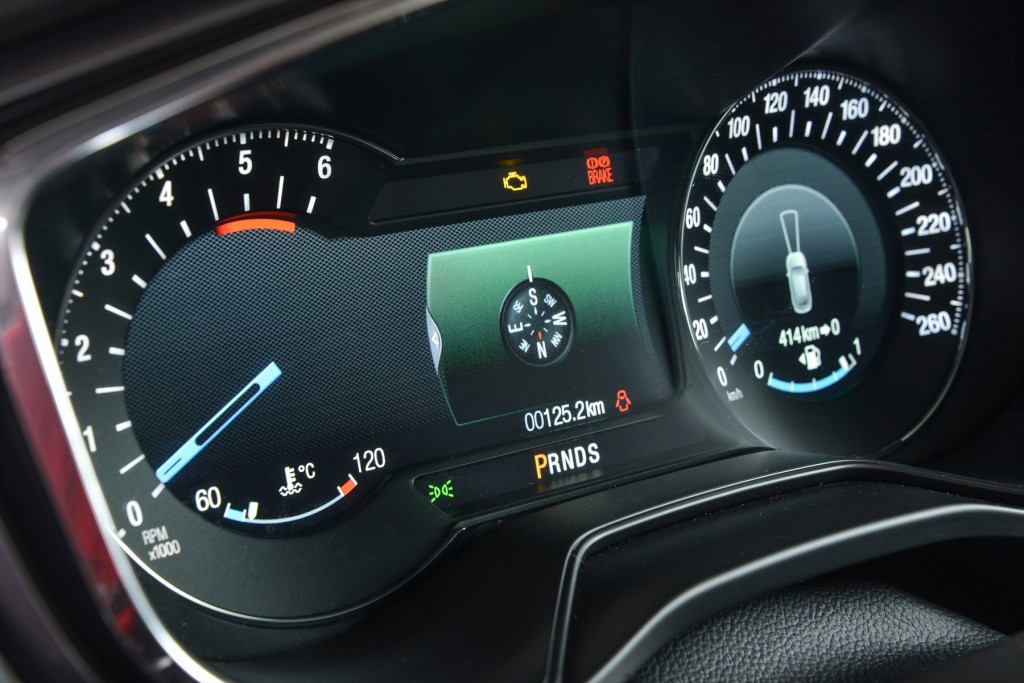 Those blue ovals front and rear bookend a feast of convenience and safety items, and with a R449 900 price tag it’s a whack cheaper than equivalent European offerings.

Sadly, there’s no navigation available in our market, which is a shame in this genre of car. 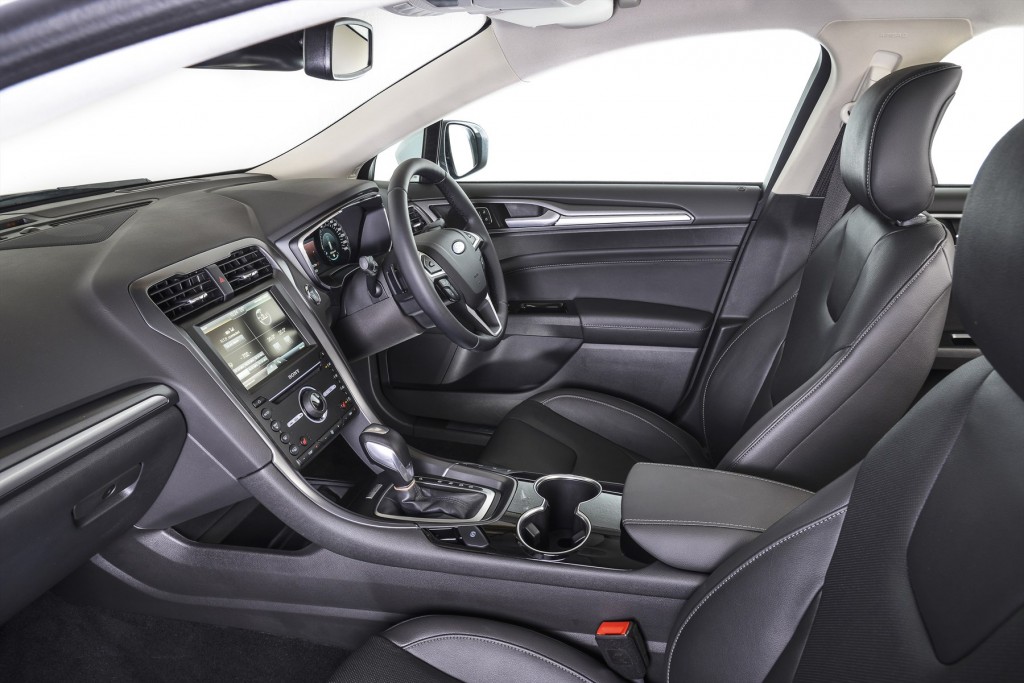 From the driver’s seat there’s never any doubt that this is a premium product, as an overwhelming array of colour touchscreens and flashy instrument cluster displays lay retinal assaults with non-stop information delivery.

It’s clear that Ford’s gadgetry department was briefed to make the dashboard look as hi-tech as possible, but as a side-effect it may have become a little overly complex.

My eyeballs rolled around in their sockets while trying to process all the data being thrown my way, and I was reminded of old-school pinball machines with a deluge of distracting multi-colour lights and bells and whistles.

While one half of my brain fiddled with radio stations the other was occupied with a confusing lane-keeping monitor near the speedo, and if while doing this I happened to wander over a painted line the steering guided me straight with a shocking, but thankful jolt.

I’m sure owners who spend more than a week with the car will find it all less perplexing over time, but after seven days I was still dizzy after each drive.

Aside from that the Fusion is very comfortable. Its front end might look Aston Martin but its suspension is all ocean liner. I won’t call it wallowy, but there are no major sporting aspirations here, and it feels more set up for long distance highway cruises than flicking quickly up mountain passes. Our car also rode on the biggest 18-inch rims and lowest-profile 235/45 tyres offered, but still it sops up bumps and potholes with softly sprung ease.

LONGER AND WIDER THAN A 3 SERIES

It’s a relatively big car too. With an overall length of 4869mm and width of 1910mm, it’s 245mm longer and 99mm wider than a current 3 Series – although it seems much bigger when trying to park in narrow bays.

Ford lists the boot capacity at 453 litres, but that too seems much bigger when you first open it and crane your neck downward looking deep inside for the rear seat backs. I’d say some of that cargo hold could have been sacrificed to free up a little more rear legroom. Not at all inadequate, but could be better.

Cabin quality is typical of current Fords with clever use of soft-touch materials in places where eyes and hands will most often go. It’s neatly assembled and styled with a modernism in line with cars it’s bound to compete with; but attention to detail isn’t quite up to standards set by segment leaders. 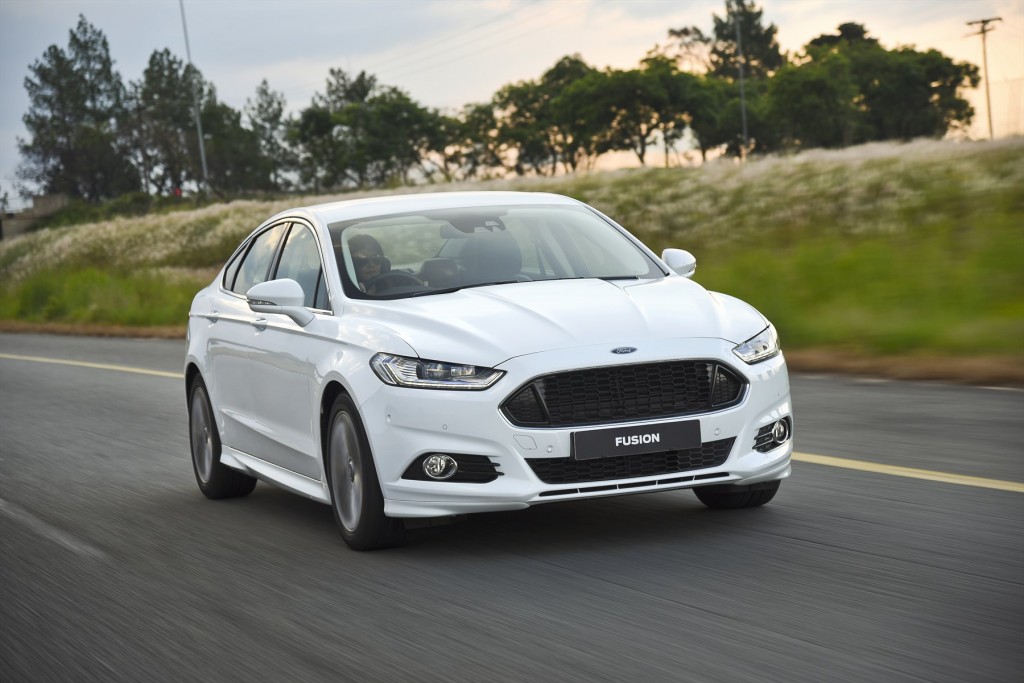 Plastic air vents feel flimsy, door pockets and under-dash panels are scratchy, and some switchgear doesn’t live up to the 450 grand price tag. I also noticed an awkwardly installed foam weatherstrip, like the kind you’d buy at Builders Warehouse, between the windscreen and dashboard, which my eyes were drawn to constantly.

The two-litre turbo diesel we tested is, on the other hand, an absolute gem. Power is quoted at 132kW but it’s the 400Nm torque figure that pulls this big body around in relaxed, low-revving style. A six-speed dual-clutch gearbox feeds the front wheels, and even if it changes up early under acceleration, there’s always enough low-down grunt to see it through to the next upshift.

Our onboard computer showed an average of 6.3 litres per 100km, which is fantastic for a car of this size and performance.

This Fusion is a worthy contender in the sub-big fish bracket, where direct rivals like the Honda Accord, Hyundai Sonata and Volvo S60 battle for scraps left by Germans status symbols. It’s big and comfortable, with loads of hi-tech safety and entertainment gizmos for the price. Just acclimatise to all the onboard systems first, because playing pinball whilst driving can be an “interesting” experience.