By eBizRadioDecember 17, 2014No Comments7 Mins Read 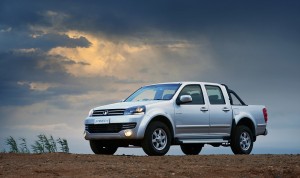 Forget the Datsun you knew. The Datsun of new aims to pander to a breed of young and restless buyers wanting affordable mobility as they carve their niche in life. This week saw the launch of the brand in SA which is headlined by the Go hatchback. But we simply have to take a quick trip down memory lane before delving into the matter at hand.

Mention Datsun and people are bound to be overcome with nostalgia. Chances are you owned one at some point. After all Datsun did enjoy numerous years as the most popular motoring marque in the land. Models like the 120Y and SSS will forever take a place in the automotive hall of fame. 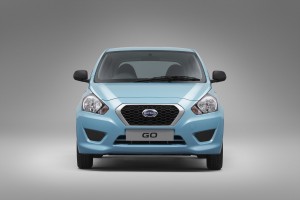 Nissan Motor Company acquired Datsun in 1934. And the title remained until it was axed and replaced with Nissan in 1986. The company revived Datsun in 2013 as a purveyor of entry-level cars for emerging markets, slotting beneath Nissan and Infiniti on the rungs of the product ladder.

Surprisingly the Datsun marketing team kept reminiscing to a minimum at the launch. Instead they went to great lengths to drive home the point that their new car is for the Risers of this world. And who are these Risers?

They are youthful, perpetually optimistic and unrelenting in their grind to blaze a trail in the big bad world. And they want cheap and cheerful transport that does not skimp on gadgetry. Nor are they willing to relinquish cool factor. 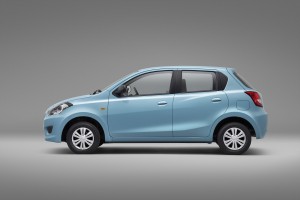 Of course, the term Riser is a buzz word in marketing parlance. Put simply, Datsun wants to win the hearts and wallets of upstarts under 25. Datsun also promised that the new car would be priced under R100 000.

And they delivered. You will pay R89 500 for the entry-level model and R99 500 for the top-tier version. Styling is a subjective thing. But the Go will not look out of place parked alongside its peers. All those city-slicker hallmarks are there. It is compact, boasts funky traits and is available in an array of interesting shades. There is scope for customisation too, with various decal packages on offer.

On the outside, the only thing that distinguishes the basic version from its sibling is the lack of full wheel covers. Inside is where you will feel the difference. The starter offering does not have power steering or an audio system. It also does without cup-holders and electric windows. And there are no storage pockets integrated into the door panels. However air-conditioning is standard on both models.

One nifty feature that will be a hit among the technology-savvy is a neat docking station that obviates the need for a radio. Simply plug in your smartphone and stream your music. You can have a conventional system at an extra cost. But one is not convinced the beige interior colour will find favour. 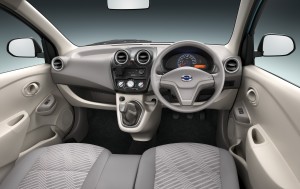 We see this in many cars birthed specifically for emerging economies. The hue might be en vogue in markets like Indonesia and India. But fashion-conscious buyers here might feel it rates low on the “swag” scale. Another highlight is the bench front seat which Datsun hopes will improve buyers’ chances of courtship.

While the surface finishes are generally inoffensive, there are interior elements that raise eyebrows. The doors close with a tinny reverberation that is unnerving. We found we could easily stick our fingers under the headliner. And the rearmost section of the dashboard seemed as malleable as plasticine after the car had been parked in the fierce midday sun.

Beneath its cheeky looking front-end sits a feisty 1198cc engine with a trio of cylinders. You will notice the anachronistic handbrake which requires a twist-and-release to disengage. The power output (50kW and 104Nm) is ample because there is little weight to shift.

It moves with the admirable eagerness of a cheerful puppy dog. And a cute three-pot thrum accompanies the momentum. You will not set the tarmac ablaze but it goes about its business as an urban commuter in a happy manner.

Although I kept my test route confined to the back roads of Pretoria, we were a tad naughty and deviated to spend some time on the freeway. This bit of subversion was imperative to bringing you an accurate report. Amidst the trucks and overzealous courier drivers the Go felt out of its element.

Its bouncy suspension did little to guard against unwanted changes in direction as a result of crosswinds. One is constantly aware of its size. In fairness it is totally honest about its mandate as a city-bound car and is on par with rivals like the Chevrolet Spark for freeway road manners.

A low price and heritage-steeped name are the biggest merits of the dainty Datsun. But it comes at a cost. What may turn the Go into a no-go for first-time buyers is its lack of safety features. There are no airbags nor anti-lock brakes and these are two items no longer seen as luxuries but necessities in 2014.

Sure, you may argue that buyers could opt for the Go based on the trusted Datsun name alone. But what is the longevity of a brand that inveigles buyers solely on the basis of nostalgia? 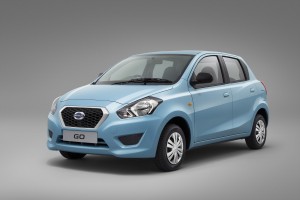