Imagine restaurants beaming the menu onto the guest’s smartphone and allowing the order to be sent straight to the bar/ kitchen. Guests can pay and leave, without waiting for the bill. ‘Shopnow’ rewards consumers for entering a store, scanning a product and when taking too much time to buy, offers a discount. Eye lenses may be able to measure your Insulin levels and send a message to your phone with required dosage. 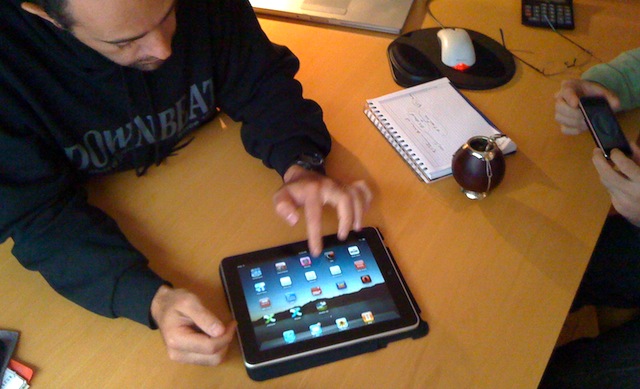 Sensor-driven watches will measure your mood and adjust the colour scheme of your home accordingly through the lighting system and paint.

When Ask Afrika was first founded they were the absolute technological trendsetter in the South African (SA) market research landscape. They were streets ahead of all competitors, when it came to technology-enabled data collection methodologies. Over the last few years they purposely lagged a bit, since so much of the mobile and internet data collection was not relevant for SA’s small base. They have now identified the need to leapfrog their expertise in the digital and technological research landscape.   They have been seriously upgrading their IT systems to this end and will continue doing so.

As part of this drive they have also been increasing their knowledge base of international digital trends and CEO Andrea Rademeyer was fortunate enough to attend the invite only Digital-Life-Design (DLD14) conference in Munich in January 2014. DLD is owned by the Burda group, one of the biggest print media businesses in Europe. They started this conference 10 years ago in order to digitise their own print world.

They have since expanded into other digital areas, through their thought leadership here.

Rademeyer said, “The pace at which our lives become more digital is breath-taking. Bigdata has gone from cutting-edge to commodity and mobility and modernity are the new buzz words in our increasingly digital lifestyles.  The quality of networks will determine the pecking order of countries and is a key factor of economic growth.”

This conference presented global cutting-edge thinking and developments, which are thought to influence the immediate future of business. DLD is a global network on innovation, digitization, science and culture which connects business, creative and social leaders, opinion-formers and influencers for crossover conversation and inspiration. There were over 150 speakers and 1000 attendees and DLD14 brought together the most influential opinion-makers, industry leaders, start-ups and digital giants to celebrate its anniversary edition.

Some of the key take-outs were that Google creates billionaire brand owners, though its innovation and acquisition of life-tracking internet software, for example Nest (which was sold for 3.2 billion USD by Google in January 2014). Google earns a billion USD per month from its knowledge of human behaviour. 1,5 million USD per hour profit. The internet gives power to big ideas with small budgets. Technology is now becoming wearable, for example Google Glass and Jawbone. There is a widening digital divide between the US, Asia and Europe. Advertising has to reach consumers on a personal level and ad-free communication, like Whatsapp, Line and Snapchat, is growing. People are seeking out online consumer reviews and ratings of schools, doctors, hospital, hotels, through services like Yelp. The protection of personal information has been a big issue recently, highlighted by the NSA (Snowden) Scandal. The future will see responsive homes, mobile medicine, invisible technology through smaller and smaller devices, 3D printing systems, immersive gaming and telematics in vehicles. The tagline for the conference was, ‘Connect the unexpected!’

Data is the new oil for the economy, personal data is exploited by people you don’t know. This is the mineral rights moment – it is important to own your data, monetise it, or another corporate will. As data citizens, we must be vigilant with our data. The authentication level of the internet will be re-worked, in order to put human beings at the centre of the internet, as opposed to companies. We are objects of the internet and we as individuals should want to be the subjects.

McKinsey forecasts that in the next decade close to 140 million jobs will be replaced by computers, by artificial intelligence (AI). This will have a huge impact on the middle market. Lord Martin Rees, professor of Cambridge demands AI limits to be set for robots. Google has committed to not building military products anymore. GoogleNow aims to replace all personal assistant planning functions for the individual consumer. The futurist Ray Kurzweil develops artificial consciousness for Google robots, which allows them to understand and copy human behaviour, only in the service environment, currently.

Ten years from now computer screens will have totally disappeared into wearables. The internet will be invisible- since it is integrated in everything we use and do. In 5 years from now, it will be all about ‘reaching the audience’- regardless of platform (TV, radio, internet) or channel (bricks/ internet). Outdoor will boom- because we are moving to a permanently multi-screen environment (RealCloudPlayer). WPP or Publicis might rather represent the consumer, than the advertiser.

When Facebook (FB) and Twitter launched ten years ago, BBM was big, now social media networks are common currency in personal and business spheres worldwide. When Facebook acquired Instagram in 2012, for nearly 1 billion USD, Instagram employed only 13 people, whilst Whatsapp, which employed 50 people and had a 2013 turnover of 20 million USD, was recently bought by FB for 19 Billion USD. Whatsapp has 18 billion messages and 500 million photos sent per day. It’s a small company and with the low cost base they commit to having no ads, no games and no gimmicks. It was predicted that in 10 years, Google and FB will dominate the financial industry.

Less known to the layman is the social network ResearchGate to which 60% of global scientists have accounts.  This is revolutionary in the sharing of ideas as 90% of science has negative results and thus never gets reported. Failed experiments get no attention. But people can learn from negative results as well. Often communication of scientific results is influenced by religion and ResearchGate breaks through these barriers and leads to scientific breakthroughs, for example Nigerian researchers collaborate with an Italian professor to discover new kind of ‘bird flu’. This creates a tree of science and it is possible to taxonomise data sets.  “We need open science- we already have open source, they want to disrupt the scientific publishing world to create the highest standards,” commented Rademeyer.

Ask Afrika understand how digital and technological trends affect consumers, making them a partner for credible conversations as opposed to just data collectors and they are introducing Digital Panel Methodology, Bigdata and Digital Consumer Tracking. They are launching a new digital product suite in 2014 which includes the Digital Barometer (partnership with Arthur Goldstuck) and Lite Data & New Paradigms.

The purpose of the Digital Barometer it is to understand the level of technology sophistication in South Africa more deeply and fully. Technology usage alone does not convey the full picture, it is necessary to understand the motivations behind technology usage. Using data from the TGi survey the population is segmented into different groups based on each group’s level of ‘digital literacy’. Digital usage patterns and motivational drivers are modelled to create each segment.

Through the use of Lite Data & New Paradigms Ask Afrika can collect data across any platform on any device. The benefit of collecting data in this way is not only a reduction in research costs or faster turnaround times, but it provides a superior and more accurate way of measuring consumer behaviour. The advantage, for clients, of this combination of ‘lite’ methodologies and ‘new paradigms’ is the ability to use powerful experimental designs to test products and concepts and to measure what Daniel Kahneman calls ‘System 1’ thinking which often allows for a more accurate description and prediction of consumer behaviour. It allows measurement and reporting on operational (daily), tactical (monthly/quarterly) and strategic objectives (annual) in a cost effective and timely manner.

eBizRadio is a live multi- platformed social media service providing an online forum to the business community for holding conversations on the key issues related to specific businesses as well as availing a space for cross-business collaboration in response to key issues affecting the world of business. The place to go if you want to know about business and lifestyle
Post Views: 401
Don't be shellfish...

END_OF_DOCUMENT_TOKEN_TO_BE_REPLACED

Final countdown to the Loeries 2013 | #SayWhatBiz with Dr Sarah Britten

Dealing with getting hacked | #eBizInsights