Remember when coffee makers were kitchen appliances and not gadgets? In fact, for many, the typical coffee machine still is a kitchen appliance. But that’s mostly because they haven’t yet discovered Nespresso, which has all but reinvented coffee.

In the process, it has also sparked a vigorous debate between coffee snobs and newly-minted coffee connoisseurs about what makes “real coffee”. Much as whisky lovers argue about the merits of “single malt” versus “pure malt” and blends, so do wannabe barristas bandy about the benefits of “single-origin coffee” over blends. These are probably some of the reasons Nestlé invented the Nespresso, with the very name suggesting a short-cut to both coffee bliss and profit heaven. The concept, as first expressed 28 years ago is simple: “enable anyone to create the perfect cup of coffee”. The result, today, is an independent brand within Nestlé that has become a veritable industry on its own, with 8300 employees across the world.

What is not as well known is that Nespresso is protected by about 1700 patents, and many of these have begun to expire. As a result, compatible capsules are being manufactured around the world, including in South Africa. Nevertheless, the Nespresso pod remains the gold standard for the democratisation of coffee, despite being positioned and priced as a luxury item.

A basic Nespresso machine, the U, costs from R1800 upward, and each pod costs around R6-R8. That’s the signal for the coffee snobs to bleat about how that adds up to the equivalent of more than R1000 for a bag of coffee, when a high-quality equivalent costs one or two hundred rand, AND it’s so much better when you grind your own beans. 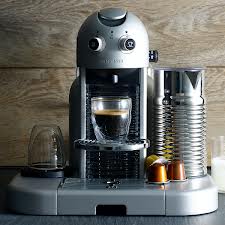 Of course, that misses the entire point of Nespresso: that you don’t HAVE to grind your own beans or figure out which bag of non-instant will make for a great coffee experience. Aside from the fact that even a terrible cuppa in a coffee shop will cost double or treble the price of a pod.

Recently, Nespresso brought its high end Gran Maestria to South Africa. Priced at a boiling hot R7950, it’s not going to get into the average South African kitchen. But it is a coffee dream machine, with a flip-out tray accommodating tall and short cups and mugs, a dial allowing for varied water flow, and a milk frother aiding in the ancient art of cappuccino and latte making.

Most Nespresso fans would settle for a U model with Nespresso’s separate accessory, the sub-R1000 Aeroccino Automatic Milk Frother.

Oh yes, you’re allowed milk with your Nespresso, since scientists have discovered that “coffee blends develop different aromatic profiles when combined with milk”. In other words, milk changes the taste of coffee. Again, that is anathema to the patrons of places like Truth Coffee in Cape Town and Father Coffee in Johannesburg. 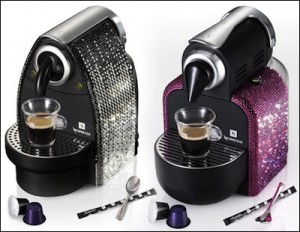 Most of the debate around pod coffee culture is related to choice and knowledge, and it’s clear that Nespresso has expanded both, for those who don’t have the time or inclination to explore barista culture. However, it is less successful in recycling the pods, which contain a mix of plastic and aluminium. Recycling plants have been introduced in countries with high pod sales, but that apparently does not yet include South Africa.

The argument is reminiscent of criticism of Apple for relying on sweatshops in China to build its iconic iPhone and iPad. It is for a very different reason, however, that a British branding consultant has described Nespresso as “the Apple of pod-machine coffee”. Few fans would argue with the comparison.

eBizRadio is a live multi- platformed social media service providing an online forum to the business community for holding conversations on the key issues related to specific businesses as well as availing a space for cross-business collaboration in response to key issues affecting the world of business. The place to go if you want to know about business and lifestyle
Post Views: 847
Don't be shellfish...

END_OF_DOCUMENT_TOKEN_TO_BE_REPLACED #BizInsight with @JasonCumming | Do you want to do business in Nigeria?